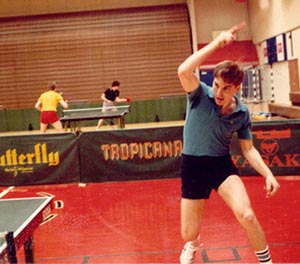 Tip of the Week
How to Learn by Watching the Top Players.

Exhaustedly Tired and Weekend Coaching
It's been an exhausting week. I had all sorts of things I was going to get done this week. But on Wednesday, I came down with what was likely 24-hour stomach flu. But the "24-hour" part isn't that accurate. It's true that I was only really sick on Wednesday - REALLY sick, 102.2 fever - but I spent the next two days (Thu & Fri) mostly in bed exhausted. I did my usual coaching on the weekend, mostly group sessions where I did a lot of multiball training. But one session on Sunday we had an odd number of players, so I was recruited to be a practice partner. It started off fine, but toward the end I was getting pretty tired. But it didn't affect my play much. Then we played up-down tables for an hour, where we'd have improvised games starting at 5-5. For example, in one set of games, the receiver had to push long to the wide forehand, the server had to loop the first ball consistently to the backhand, the then play out point. Or the same, except the receiver had to push long to the wide backhand. Again, I started out fine, and despite 20 players ranging up to about 1950 level, I quickly reached the first table.

Tip of the Week
Be Both a Machine and an Artist.

Princeton Pong Tournament
I went up to Princeton, NJ on Friday (three-hour drive from Maryland) with five of our kids and their parents, and coached at the Princeton Pong tournament on Saturday. Here are complete results, care of Omnipong. A great thanks goes out to tournament staff Ben Rosenberg (director), Claudia Dunlevy, and referee Chris Lehman, and to the other volunteers who helped out with the tournament.

This time around it was a group of our younger kids, all rated under 1300, ages 10 to 13, most of them playing in three round robin rating events. Four of the five had never played a tournament outside Maryland. They had a great time - I wonder if I was that excited to play in tournaments back when I first traveled to tournaments back in 1976? (Answer: yes.)

Tip of the Week
Be a Machine But Not Mechanical.

Weekend Coaching, an Exhausting Session, . . . and USATT or Local TT
It was another busy week at the Maryland Table Tennis Center. I had four group sessions, plus a private session with Navin Kumar. (As noted previously, I'm retired from private coaching, but made an exception for Navin, a Paralympic player. I'll likely be coaching him at the World Parkinson's Championships at the 2022 ITTF Parkinson's World Table Tennis Championships, Sept. 30 - Oct. 3, 2022, in Pula, Croatia.) Head junior coach Wang Qingliang ran most of these sessions, with Coach Lidney Castro running one of them. (I used to run many or most of these sessions, but now that I'm "semi-retired," I've taken a back seat and let others be in charge while I assist.)

USA Table Tennis Issues
This site is called TableTennisCOACHING.com, not TableTennisUSATT.com. Readers know I disagree with much of what USA Table Tennis has done over the last two years. I try to ignore much of it, and probably write only 10% of what I could. Alas, there's a lot here to write about. I really do not plan to not do any more USATT "editorials" after this for a while, other than reporting things like the results of the upcoming athlete election, etc. Skip the next five segments if you aren't interested in USATT issues. (Item #5 is about the Nationals going to Fort Worth.)

Tip of the Week
The Most Important Technique in Table Tennis.

Coaching at the MDTTC Open and Weekend Coaching
I spent Saturday coaching players from our junior program at the MDTTC Open. It wasn't easy - I had a secret I kept from everyone. I woke up with an intense headache, probably from reading late the night before. It never went away - I spent the whole day with a jackhammer in my head. But I didn't tell anyone, and hopefully none of the kids I coached noticed anything different. I still had the headache this morning, and almost postponed the blog, but it's a bit better now. Yeah, that late-night reading habit can be a headache!!! (I might need new reading glasses - I have an eye appointment Feb. 24.)

Tip of the Week
Go After Your Opponent's Weaknesses - But Not Too Much!

Weekend Coaching, Push Depth, and Improvised Games
I had another busy weekend, coaching in five junior group sessions. As usual, the focus for beginning to intermediate players was fundamentals, so lots of standard stroking and footwork drills. We still keep it fun - I ended two sessions with impromptu "Simon Says" competitions for the whole group.

Tip of the Week
Use Top Players as Models For Your Technique.

Weekend Coaching, Placement, and Receiving a Short Serve
I coached in four group sessions this weekend. I focused a lot on placement. I remember something Ricky Seemiller (eight-time US Men's Doubles Champion with brother Danny and a long-time US team member) once told me at one of my first training camps: "Amateurs practice to the middle forehand and middle backhand. Professionals practice to the wide angles." What does that mean? Many players get in the habit of practicing their shots to exactly what Ricky said - the middle of their partner's forehand or backhand sides, typically 6-12 inches inside the corner. Top players don't generally practice or play to this area - why would they make things easy for their opponents? Instead, keep the ball to the wide corners in drills, with just as many balls landing outside the corner as inside. If you do it in practice, you'll do it in matches. (A version of this will likely become a weekly Tip.)

Tip of the Week
Focus on the Next Point.

Weekend Coaching
Had a pretty busy weekend coaching group sessions with my fellow coaches, Wang Qingliang and Lidney Castro. (Cheng Yinghua and Jack Huang were also there, but doing private coaching.) I had an interesting experience on Sunday. I was only scheduled to coaching one session that day, 12:00-1:30 PM. Afterwards, I went to Panera's to do some writing. I left my playing bag in the trunk of my car. It was cold out, below freezing. At 3:40PM I got a text from Wang, asking if I could come in at 4PM. The problem was that my racket was now ice cold! What did I do? I cranked the heat on full blast while driving back to the club, and held my racket in front of it most of the way! I roasted both sides, and the racket was nice and toasty by the time I got to the club. (A cold racket plays dead.)

Tip of the Week
The Most Important Reason for a Match Coach.

Junior Ratings and Rankings
One of my pet peeves is when the junior rankings include non-juniors because of database mistakes. I don't blame USATT or others for this, but I do like to see them fixed up. When I find them, I periodically email USATT to let them know, and they always fix them up. I emailed about a number of new ones on Dec. 27, and I'm sure they'll fix them up soon. But until then, here's what you find if you do an age search - and what sponsors see when considering sponsoring a junior player. (These mistakes often happen when players or tournament directors mistakenly put in the current date for DOB.)

Tip of the Week
Take the Weird Styles Pledge.

Serving Tactics
One of the things you learn as you play more - assuming you are a student of the game - is to get a feel for what serves work at what times. Someone asked me about this, and I used as an example two serves at a key moment in an international match I recently coached at the America's Hopes in Cuenca, Ecuador. I was coaching Ryan Lin, who was the top-rated 11-year-old in the country at the time. (He's 2176 and recently turned 12.) I will call the other player "Doe." Doe was also the best of his age from his country and was rated/seeded higher. At 8-8 in the fifth, with Ryan serving, I called a timeout, both so Ryan could relax and clear his mind, and to discuss what two serves to use. (I initially wrote this calling Ryan as "John," but he and his father said I could go ahead and use his name.)